Eggdrop is the oldest Internet Relay Chat (IRC) bot and still in active development. During my undergrad days, I have run a private IRC server for our student group. It was fun to tinker with it and I wrote some smaller extensions that made it easier to use, especially a Jabber (now XMPP) integration that allowed to call everybody to join the IRC. It also allowed for some fun with Tcl.

Please note, that these modules are no longer developed or maintained. They are available only for reference. The code is available on Github.

The Eggdrop Jabber Bot bridges the Eggdrop IRC bot to the Jabber (now XMPP) instant messaging network. It was an experiment at the time when these communication platforms were the most popular during my undergrad days. They were open systems that could be easily accessed with readily available libraries.

The major feature of this integration was to allow for inviting people from within IRC by reaching out on Jabber. IRC provided a great group communication platform, much more sophisticated at the time than what Jabber supported. This was useful for discussion, e.g., solving weekly assignments. But Jabber was better in actually reaching people quickly. So, this little script bridged the two to build on their respective strengths. 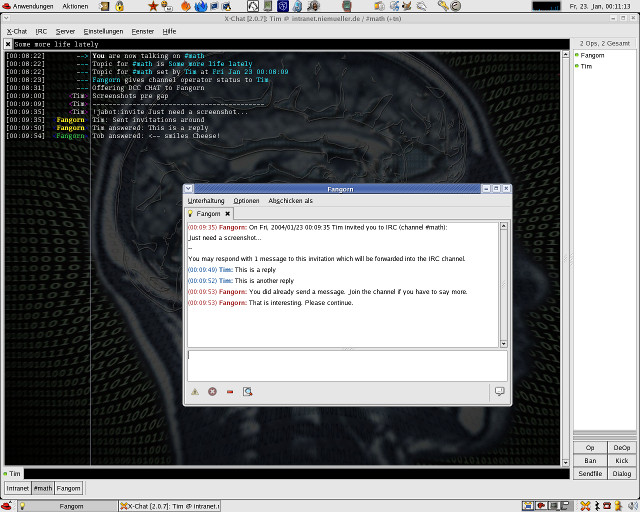 This little extension was a first test. It integrates the Perl CTAN module Chatbot::Eliza into Eggdrop. Whenever the bot is mentioned in a channel, it will answer with a typical Eliza reply.

ShoutCast is a server component to stream audio over a network. The Open Source alternative is Icecast. This script allows to retrieve some basic information such as currently playing music. I have developed it in 2004 for my brother when he ran a private streaming server. It parsed some information from the informative status webpage the server provides and provides it through some commands in an IRC channel via Eggdrop.